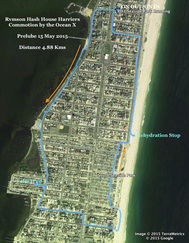 The Rumson Hash House Harriers, The Hell's Angels of Hashing, host an event the weekend before the US of A Memorial Day Holiday in Seaside Park New Jersey.  This year the event was the weekend of 15 - 17 May and drew a crowd of over 100 eager hashers, from the US and Canada (28) to partake in the fun and festivities as well as get a little bit wet on the Saturday afternoon run.  Generally all of the hashers are accommodated at the Windjammer Motor Inn however, because of the number of attendees several hashers had accommodation at other near-by motels.  During this event the Windjammer is exclusively hashers.
Because of the distance many hashers have to travel they opt to arrive on the Thursday evening and partake of a pre-hash boat cruise and dinner.
The group that I travelled with did arrive on the Thusday evening but much later than the sailing.

FRIDAY 15 MAY
Friday afternoon is the actual start time for the weekend and begins with a casual walk up the boardwalk at noon to Seaside Heights.  There are two 'villages' which run one into the other along the peninsula, Seaside Park, the base for RH3, being the southern, and Seaside Heights being the most northerly of the two.   Our walking took in the ocean view and culminated on the boardwalk with some of the local liquid beverages.

The boardwalk has certainly changed since my first visit.  Hurricane Sandy one of the most destructive hurricanes in 2012 completely destroyed not only the boardwalk but also the roller coaster.  Just as the boardwalk was being rebuilt for the 2013 season a fire destroyed the section which had been rebuilt.  Although it is once again in the rebuilding stage which is trying to maintain the original appearance I do not believe there is very much remaining of the older boardwalk and amusement stands.

After our cultural and historical tour of the boardwalk it was back to the Windjammer to formally register and then get ready for the Friday afternoon run.

The run took us through the residential section as well as some of the summer rental cottages to end up on the beach to be rehydrated.
Originally the run was supposed to take us into  Island Beach State Park at the end of the peninsula but the hare said that when he was setting the trail there was a sign on the entrance saying that the park was closed.  Consequently he had to change course and simply run us along the boardwalk.  The run turned out to be 4.88 Kms.  A pleasant run on a warm afternoon.

Once back at the Windjammer it was time to get ready for the Friday night Blues Brothers visit to various venues on the boardwalk.  This is an annual event and creates a lot of comments as we stroll along the streets to begin our adventure in Hemingway’s.  Here we are treated to free amber nectar as well as hors-d'oeuvres.  After two hours in Hemingway’s it was off to visit four other establishments.  It ended up a very pleasurable but late evening.  And it left many people shaking their heads wondering what was going on. 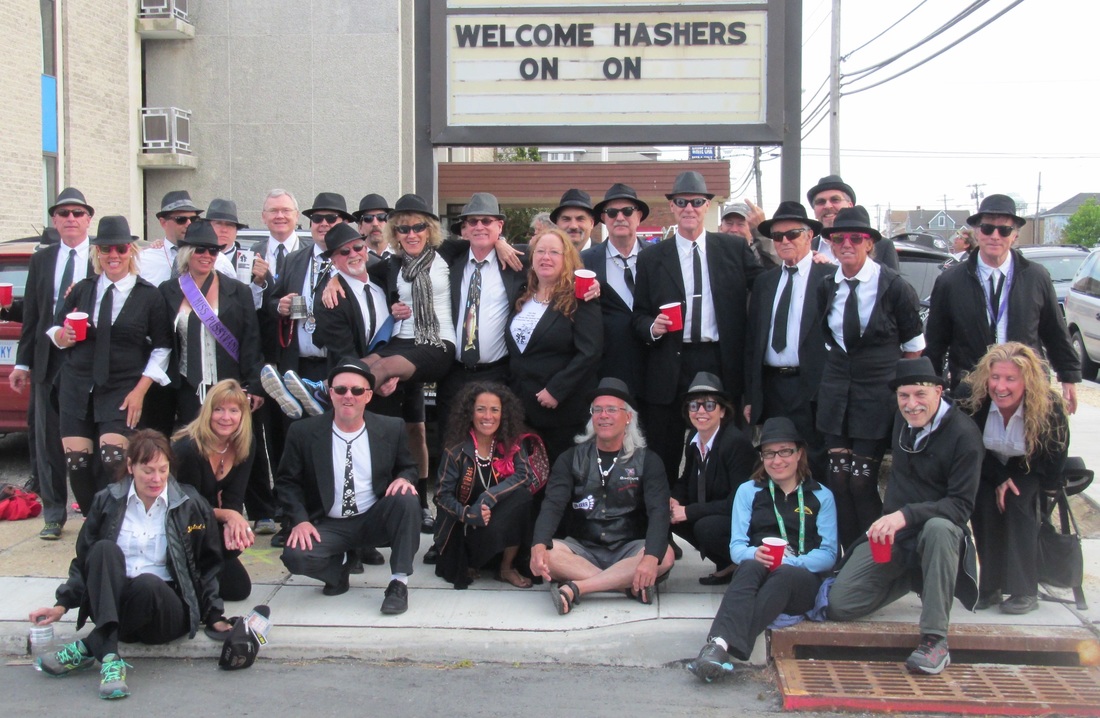 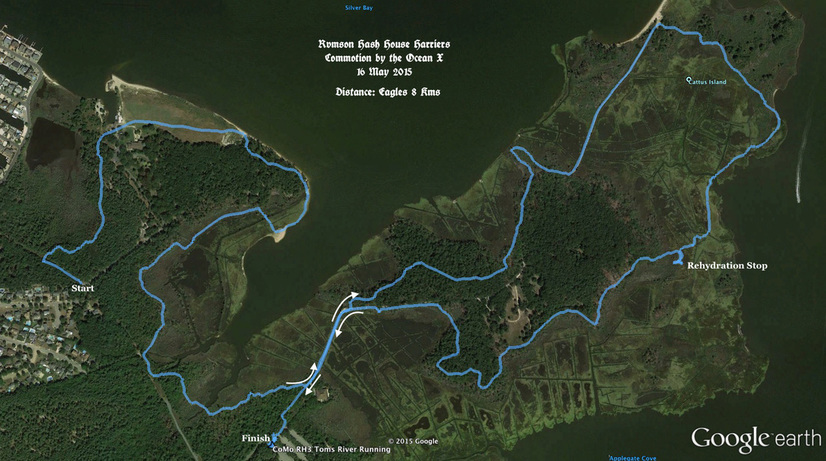 Saturday morning started with breakfast being served at the Windjammer.  The omelet maker was in fine form and he did his best to ensure that we were all well fed.  Along with the made-to-order omelettes there were bagels, buns, stuff for vegetarians, various jams and peanut butter of course there was ample juice and coffee.

The traditional start time for all Saturday CoMo events is exactly 10:17am!  And you had better be on time or you will miss the bus.  At precisely 10:15 two big yellow school buses pulled up in front of the Windjammer and the hashers were quick to clamber onboard [the other bus sucks!] for the ride to the Ocean County Park where the run would begin.

Upon reaching Ocean County Park the eager hashers piled out of the busses, got themselves in a disorderly array and dutifully and silently awaited the hares run instructions.  After receiving the over complicated trail markings, and being informed that it was an ‘A’ to ‘B’ trail the eagles soared off on their trail while the chickens strutted along theirs.

The eagle trail took us along the well laid out trails through the woods, open salt marshes, board walks, through tall grass and into the woods with very few brambles.  Everything was going well until we came to the first water crossing which some of the younger and more agile hashers were able to jump across.  Most of the rest of us had to wade through waist deep water to reach the other side.  Upon reaching the second and third water hazards there was no way across except through the water.  In these cases the water was not the main problem but the mud and gunk on the bottom that came up to my knees, which put me in chest deep water!  There is one of the Ottawa Hash House Harriettes who is only about 5 feet tall and I so wanted to see her make these crossings.  But, that was not to be — she is a swift (running that is) devil and was well ahead of me.  When I met up with her at the rehydration stop I asked her how she made out (with the water crossings!) and she said that because she is so light she hardly sank into the mud at all.  The fourth crossing was wider and she said she just swam across it.

Sadly, for me, my camera battery died shortly after starting trail so I missed some of the better shiggy shots. You can check out what photos I did get by clicking the button at the top of the page.

Not to give any credit to the hare but this was a very well laid out trail.  Not only was it well marked and easy to follow but there was just enough shiggy to keep everyone happy.  Being a warm day the water crossing could even be counted as a blessing to help keep the eagle cool.  It is a shame that the chickens did not have the same opportunity.  Speaking of chickens most of them managed to make it to the rehydration stop on time but a few stragglers, and maybe a couple of eagles as well, got lost on trail but finally did make it.  It was a sight to see them try and get through the last water crossing.  Finally they got wet!  Luckily we had all been forewarned to bring a dry bag.

Once completely rehydrated and tired of being bitten my tiny little bugs it was once again off on trail through the woods to arrive at point ‘B’.  After a bit of a wait the buses arrived to transport us back to the Windjammer.

There was sufficient time to partake of some liquid refreshments before getting ready for the ‘Fifty Shades of Grey’ party and supper.

What do you expect from the Italian owners of the Windjammer except an Italian buffet for our supper?  Not only were we supplied with a scrumptious supper but an open bar until late into the night.  The band provided us with with a lively assortment of music which kept the dancers on the floor all evening.  Those brave hashers who took the theme to heart and dressed in their best rendition of ‘Shades of Grey’.

At the midnight hour a few hashers made a mad dash to the beach for a “Midnight Madness Run”.

On the morning of there 17th of MayaAfter a buffet breakfast at exactly 10:17am a group of dedicated hashers set out on what was to be the most brutal and terrifying run that most had ever encountered.

Words can not describe the absolute horror and danger that the heartless hares forced upon.  It is only through the perseverance of the hashers that they completed the trail unscathed.

As I said - words can not describe the misery and anguish the hashers suffered through, you will have to check out the photos and trail map to fully understand the pain and suffering that was endured on this woe begotten trail!

Back at the Windjammer it was time to circle up.  One of the Rumson traditions is, they do not have a circle at their regular hashes.  Consequently RA the Religious Advisor from Hogtown H3 conducted a well received circle.

Later that evening the few remaining hashers were out to newly opened restaurant that was recommended by the staff at the Windjammer.  While the restaurant was still undergoing construction there were no complaints about the food.

ALL IN ALL A VERY WELL DONE TO THE FINE RUMSON HASHERS FOR ANOTHER FANTASTIC WEEKEND OF FUN AND FRIVOLITY AND THE RUNS!