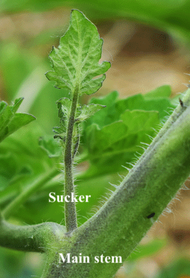 While working in my allotment garden on Thursday, 07 July, 2022 I was talking with one of my gardening friends about the fact that I cut out the suckers on my tomato plants.  I put some of the bigger ones in a container of water and there is at least a 50% chance that they will sprout roots.  In some cases, maybe just pure luck, it can be as high as 90%.  No matter what the percentage actually is some do sprout good strong roots and I either plant these into the garden or put them into a hydroponic system.

While we were chatting I told (retold?) him about pruning out the suckers and showed him the Paul Robson suckers that I had pruned a couple of days before that had started to root in water.  He asked if I knew about the story of weeping willow branches helping a water based rooting system.  I had actually heard about that before and we just continued chatted and he suggested that I should try a bit of an experiment to see if it actually worked.  I agreed that it would be something to try.

On Friday, 08 July, my mind was made up that I should give it a try.  I finally decided on try four different models.  Using new growth Weeping Willow cuttings I would put one in just plain water which would be my base sample, one with 3 branches with leaves, one with 3 branches with no leaves and one with 3 branches that were cut into about one inch pieces. I made the short trip to a weeping willow tree that is on the edge of the allotment gardens and snipped off some new, thin branches about two feet long.  I took these back to the allotment and put them in the allocated plastic ice cream containers and filled to almost full with city tap water that is supplied to the gardens.


01 August      After one week in water solutions
My hydroponic experiment with the willow branches is not working out.
I think the willow water may have become polluted during the initial 4 days soaking
time.
This may be a result of:
A:  water/willows started in a closed container,
B: the water got to hot during the hot spell we had or
C: a combination of the two.
The one sucker in the bucket with just water and hydroponic solution seems to be
fairing well.
​
The Paul Robson suckers are coming along quite nicely!

Conclusion:      New growth Weeping Willow branches, in a small way may help tomato suckers
sprout.  While the germination time may be within a day or two the strength
of the roots growing with the willow branches appear to be more abundant
and stronger that those in plain water.  Therefore, a conclusion could be that
new growth Weeping Willow branches may be considered to be a viable
form of 'green' fertilizer.
In my experiment one sucker, with the willows produced roots in only three (3) days while after
six (6) days the other two have not sprouted.  After six (6) days this sprout appears be the
strongest.
From my findings it appears as if either bare new growth or cut new growth gives a more
​                               favourable result.
After 9 days all suckers that are growing with the new growth willow branches appear
to be more abundant and stronger than those in plain water.
No doubt further experiments should be carried out to confirm these findings.
Some published data suggests soaking the Willow for 3 to 4 days in water and then adding the
suckers.  According to my findings, if that were the case it would not be "time productive" to
follow that advise.

NOTE:                Day 15, 23 July 2023, may be the last day for this part of the experiment.  Depending on
the weather tomorrow I will be putting the strongest sucker from each sample into a
hydroponic system.  I have been soaking weeping willow branches in water and tomorrow
will be the 4th day which according to various internet sites that is the usual length of time
to soak the branches.  I will measure the longest root length when I put the suckers in
the hydroponic buckets. 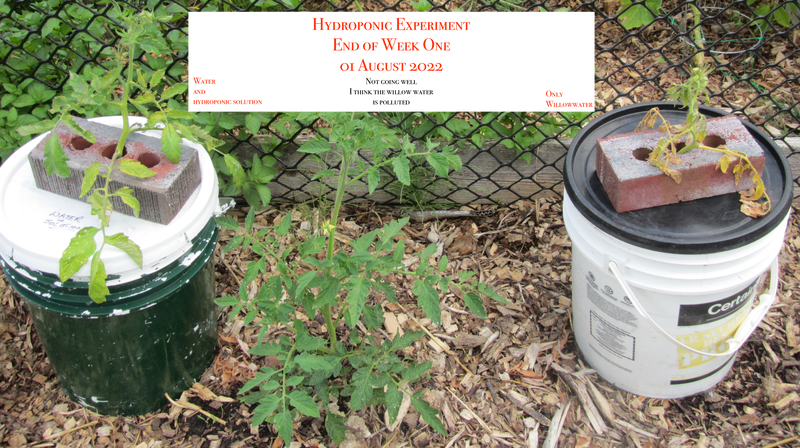 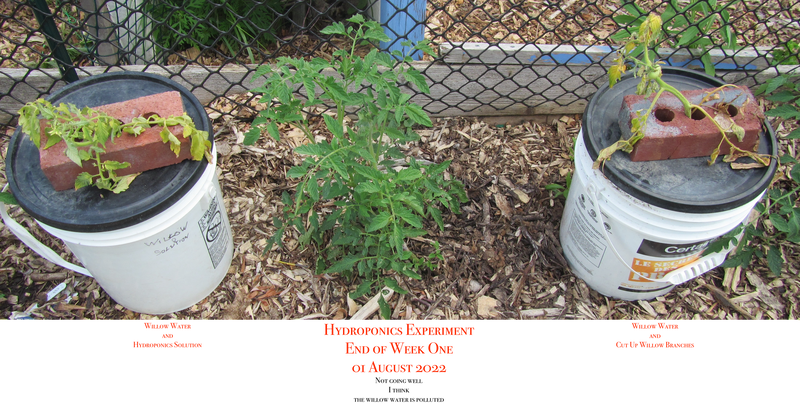 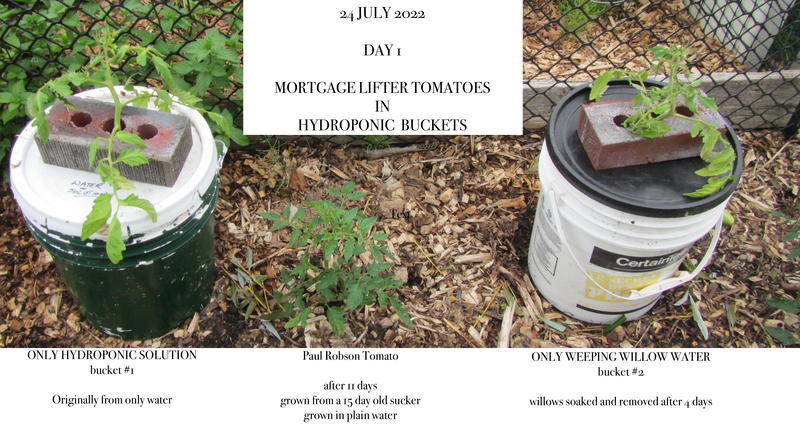 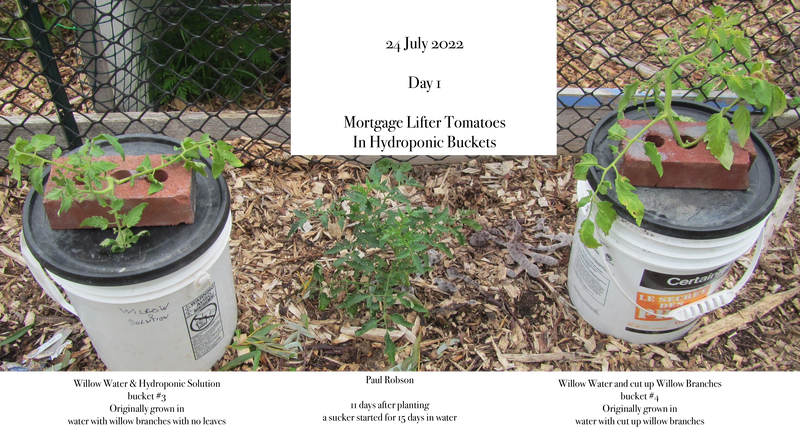 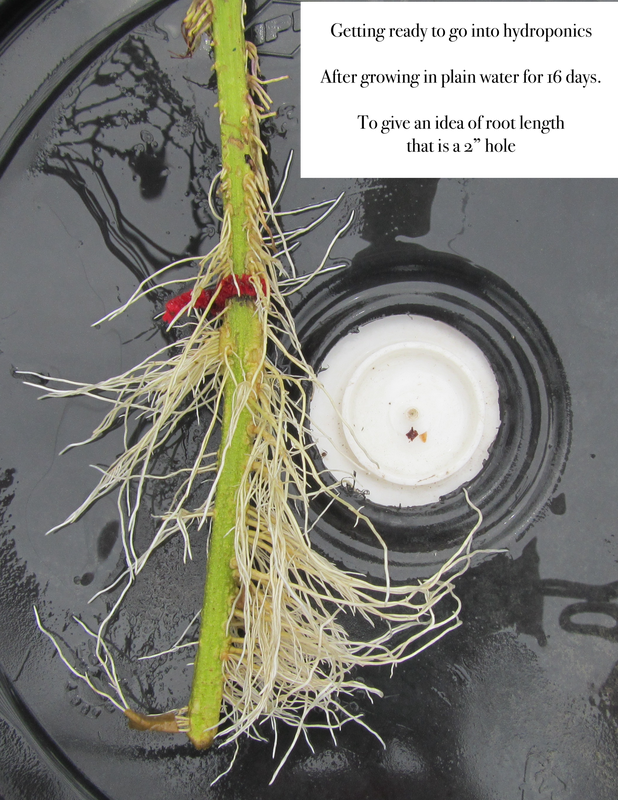 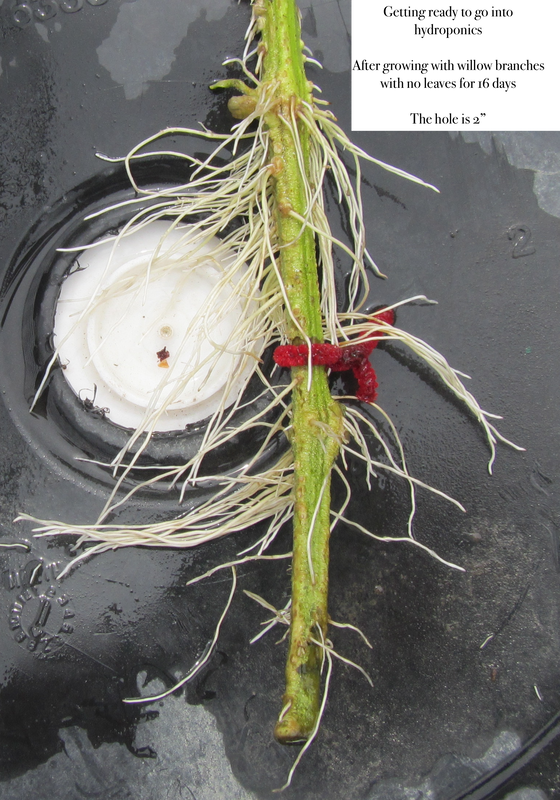 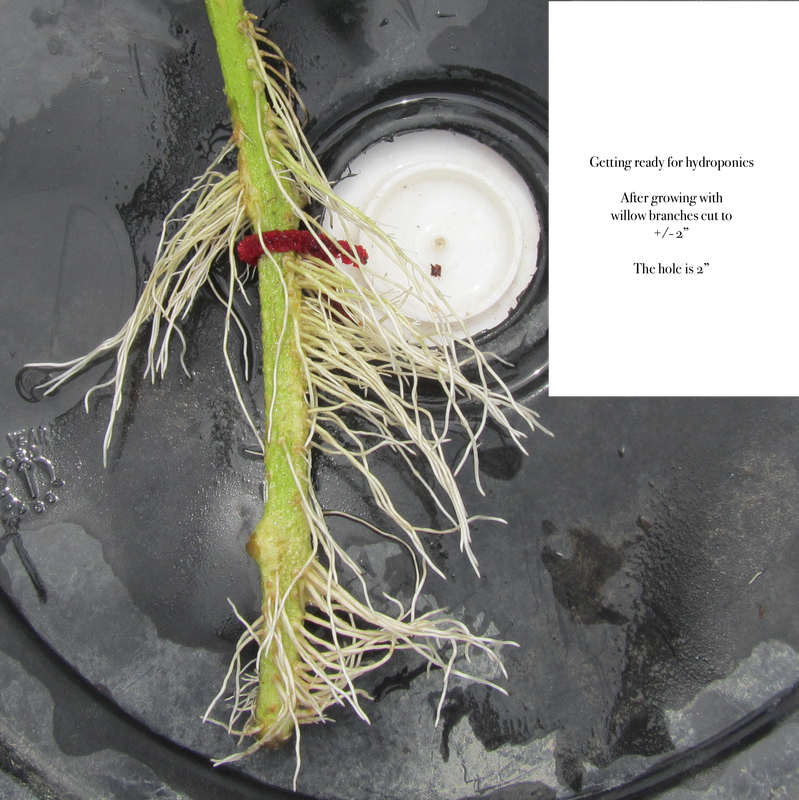 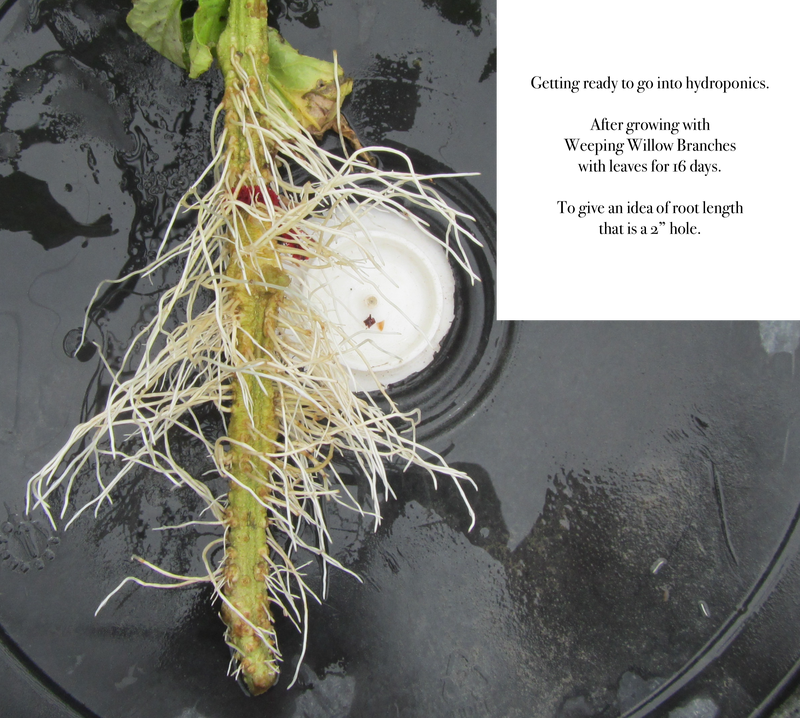 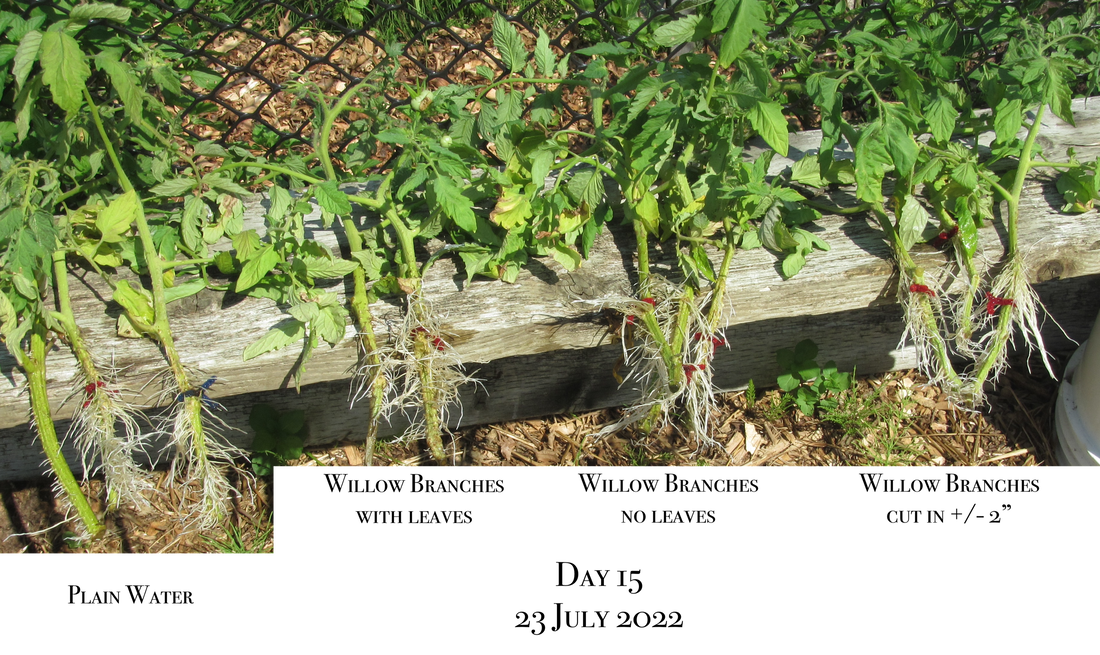 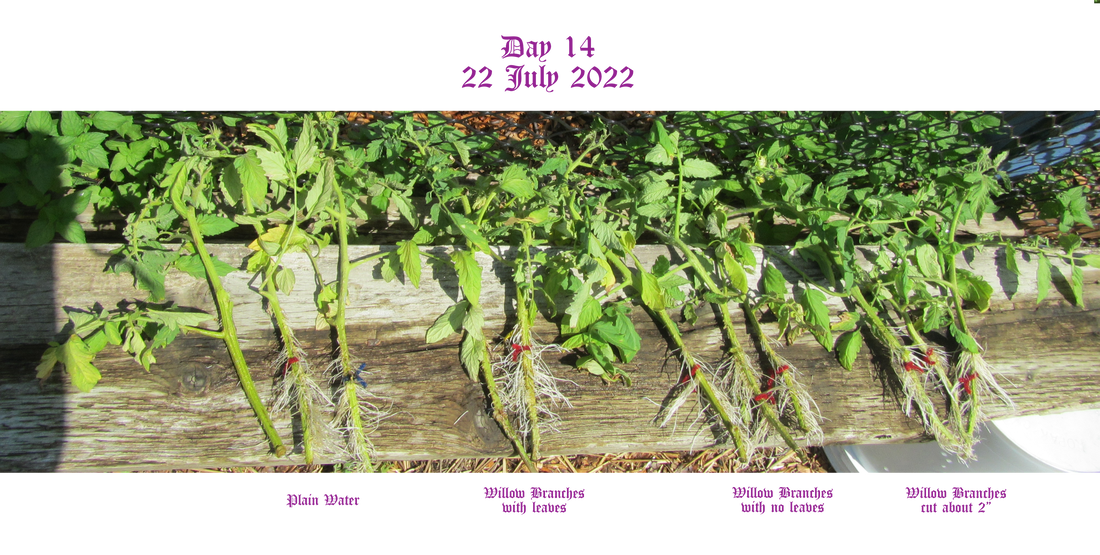 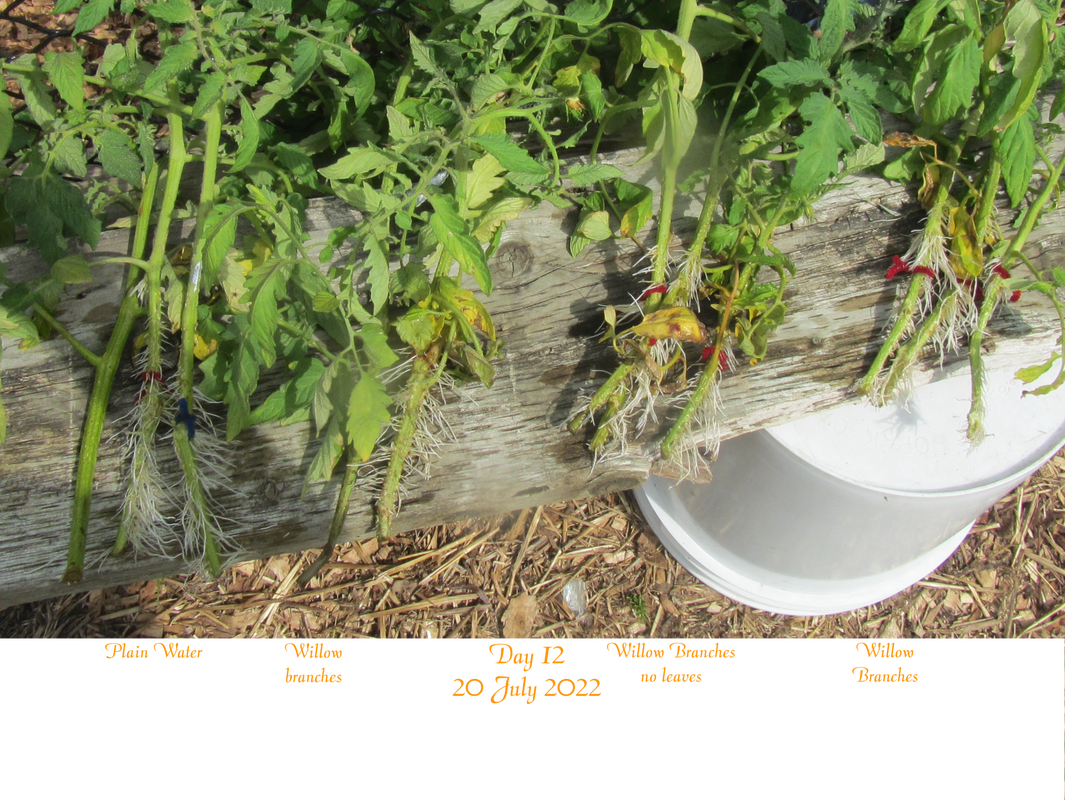 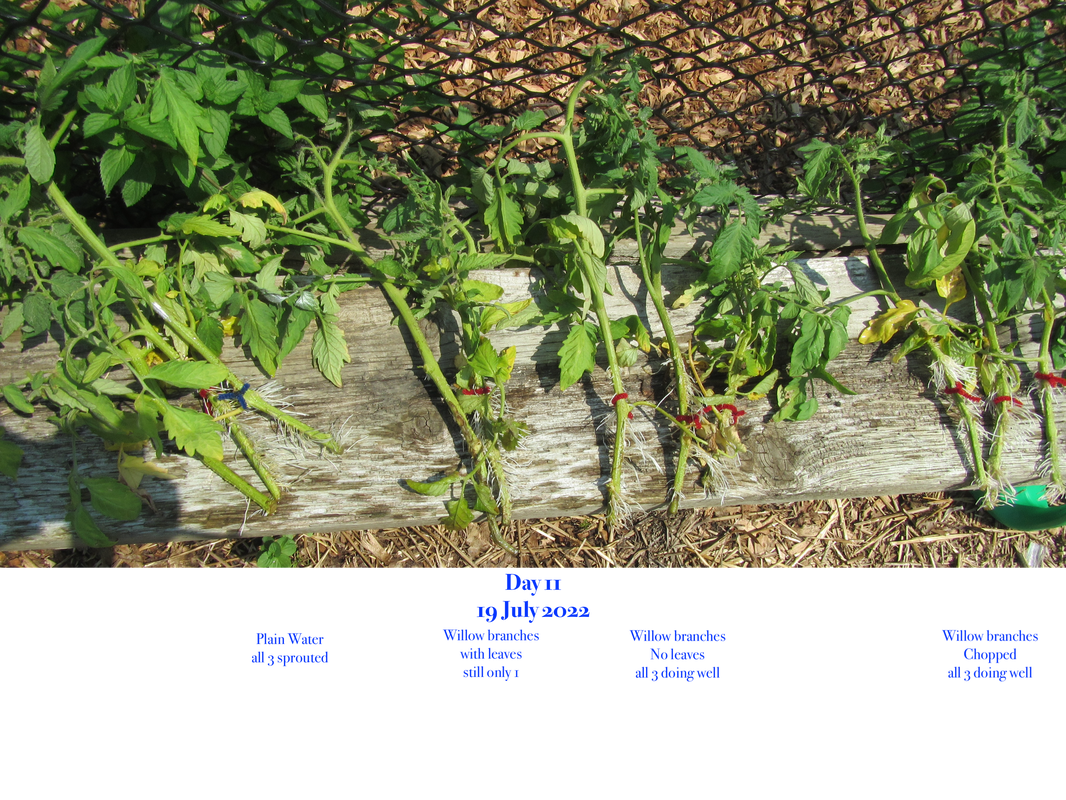 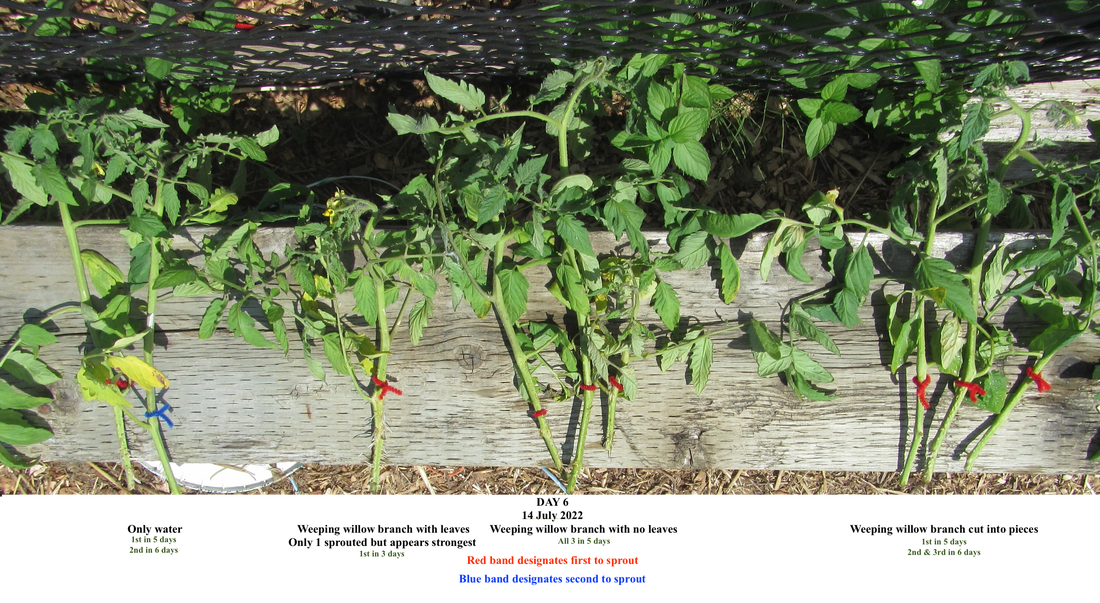 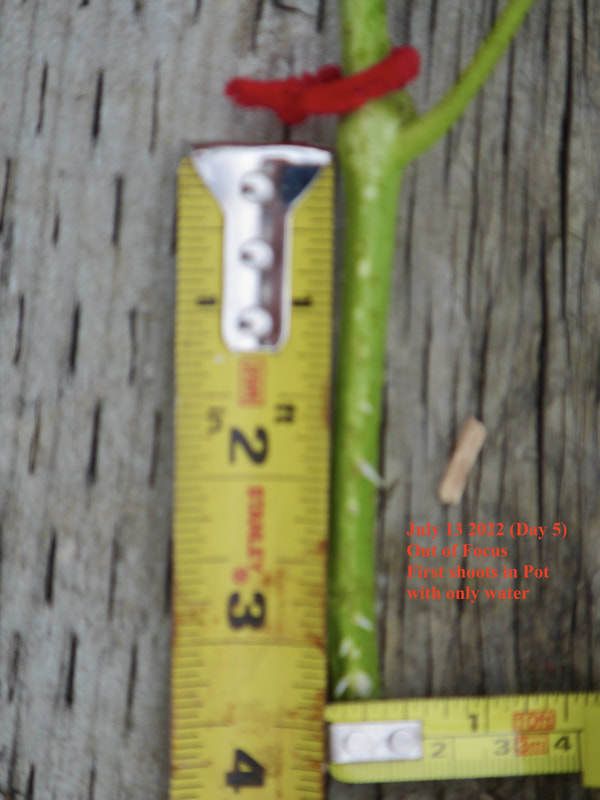 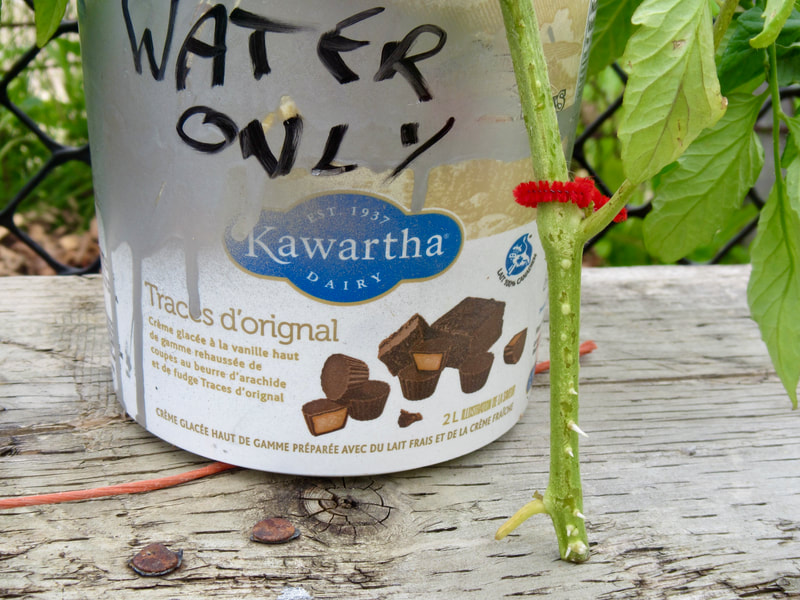 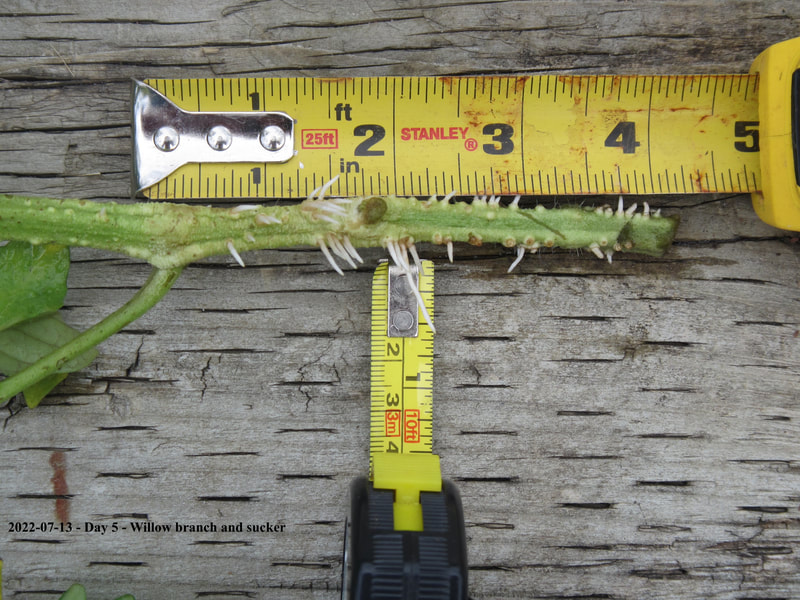 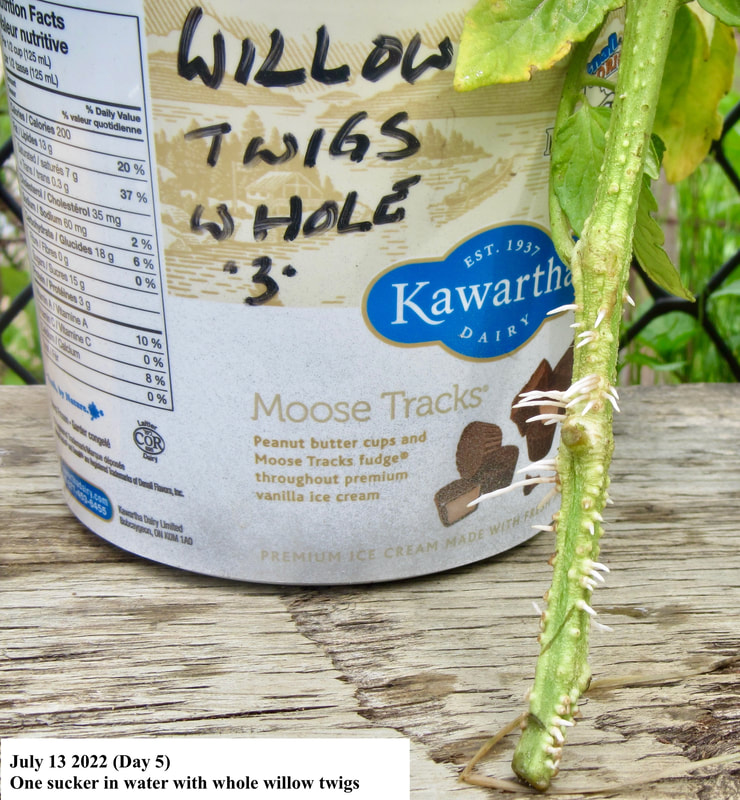 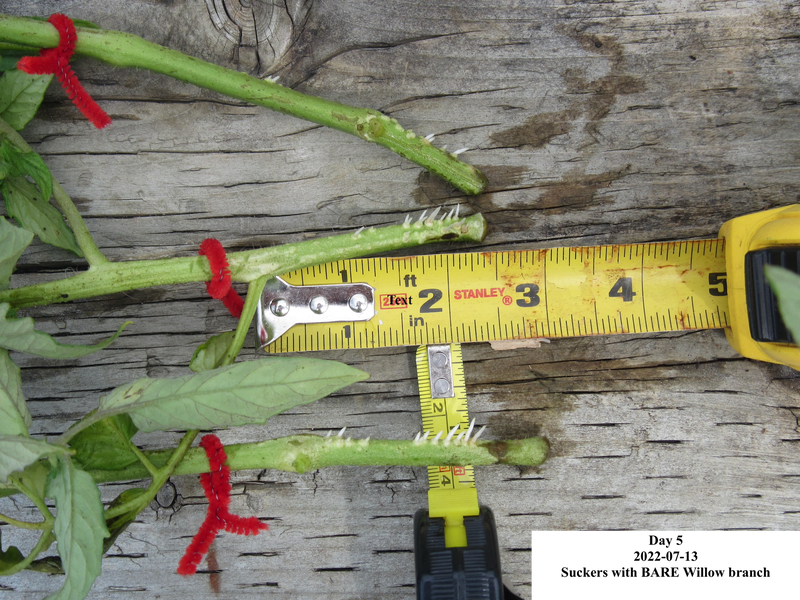 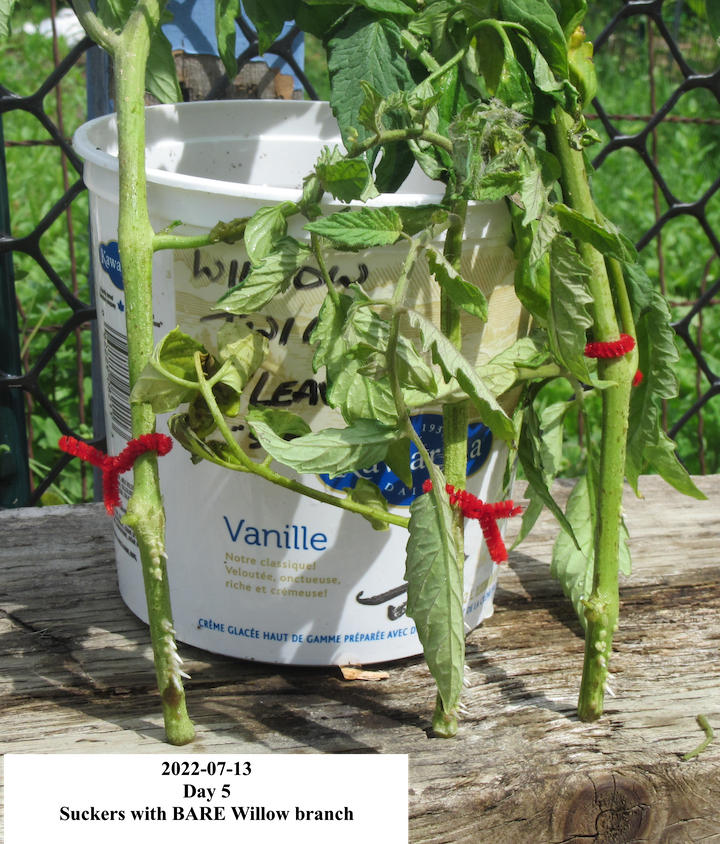 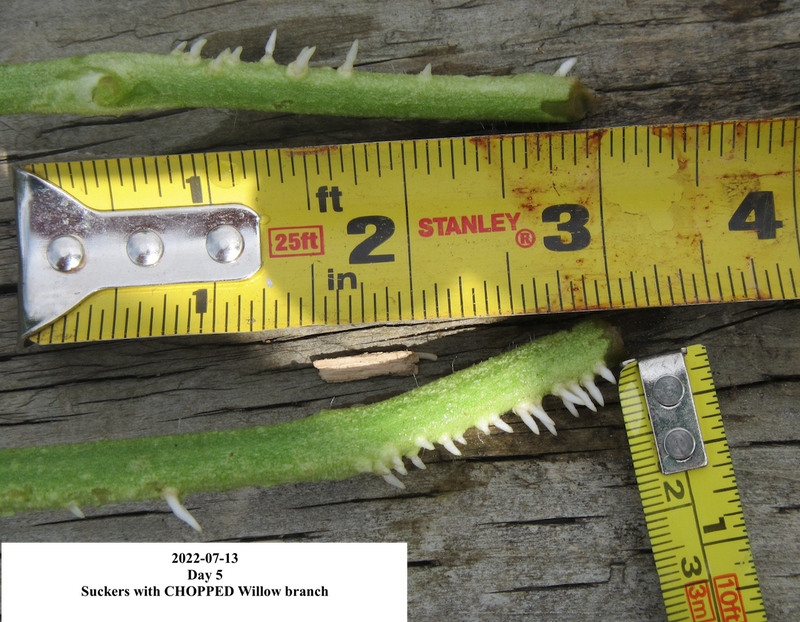 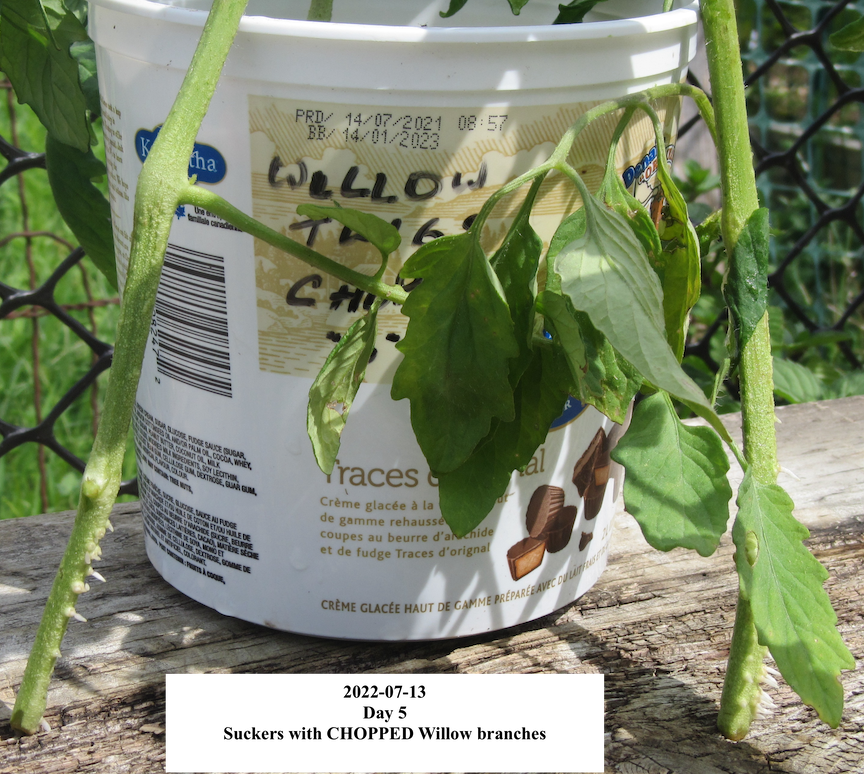 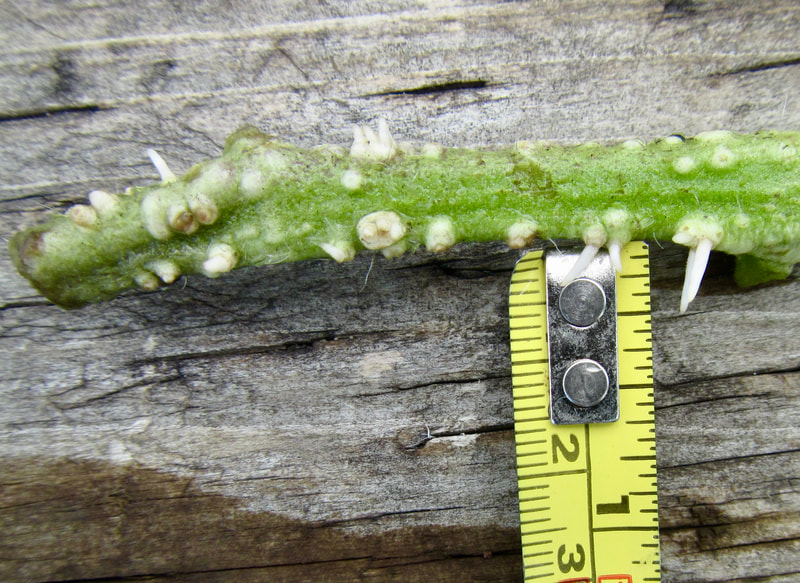 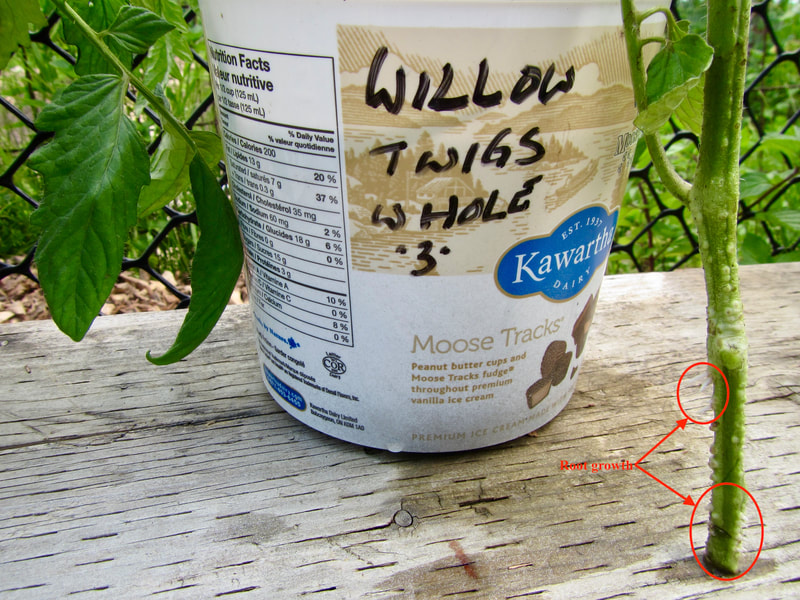