While the InterHash usually only covers one weekend there are several, and sometimes conflicting, events both before and after the event.  These events may even be in a different country than the main event.  Nearby hash clubs may wish to take advantage of the visiting hashers and provide them another place to do some interesting running.

The Bali InterHash had 10 different run sites with short, medium and long trails from each of the sites.  All trails started along the same path and then split off at which distance you wanted to take.

As the trails were at least an hour from Sanur Beach we were bussed to the various sites complete with a police escort in the front and rear.  This meant no stopping at traffic lights, intersections or traffic jams.  It was a little nerve wracking to take the 'middle' lane on a two lane highway.  The police cleared the way and we continued up the centre of the cleared path.

Bali with all of the InterHash2016 trails that I did. 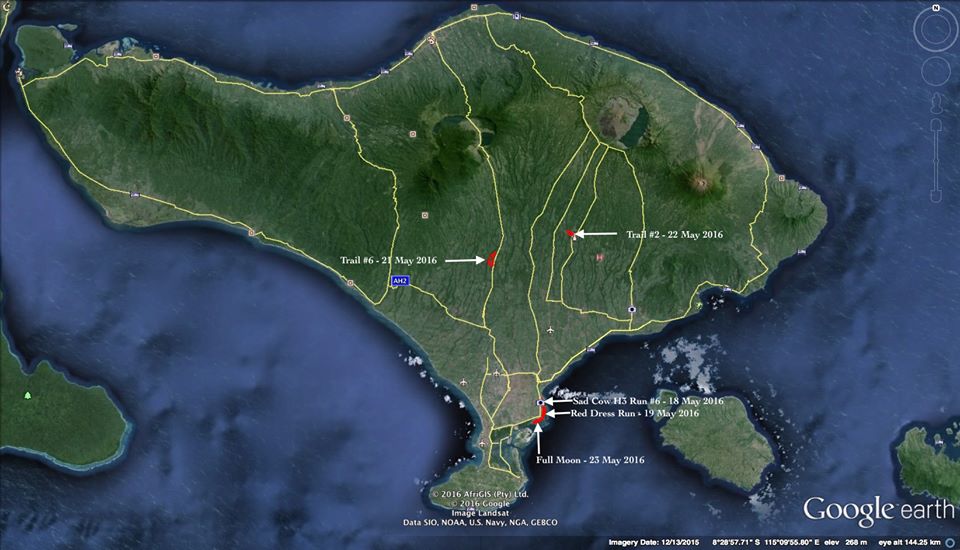 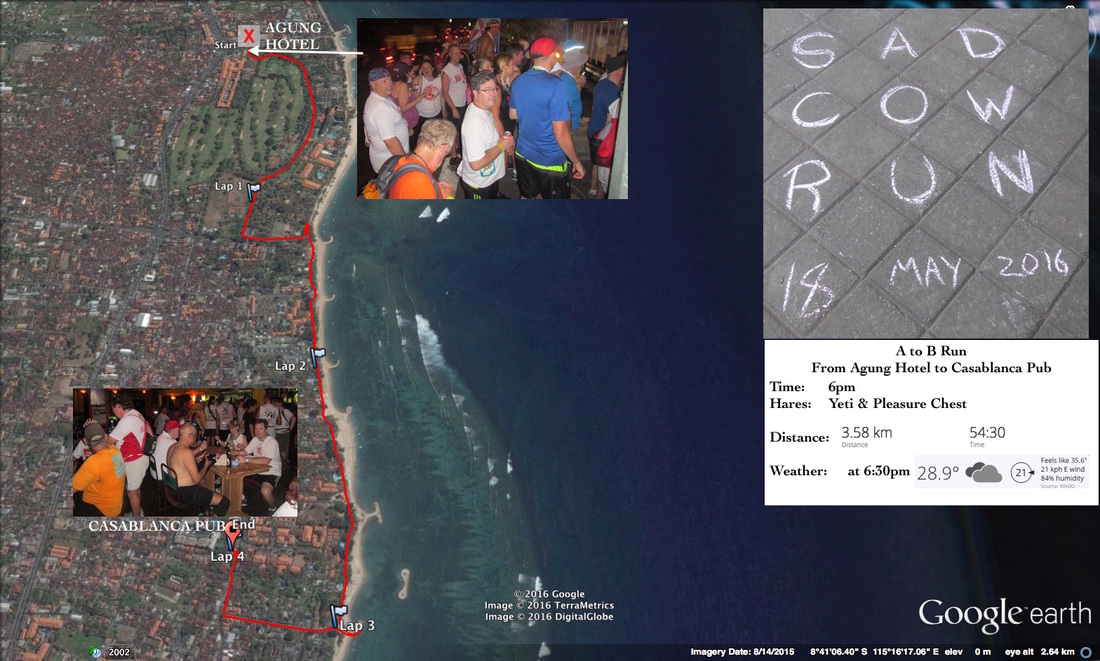 The Sad Cow Hash House Harriers group was originally formed by a group of Canadians after the Chiang Mai, Thailand InterHash in 2006.

The group travelled to the island of Sai Kaew off the southern coast of Thailand with the idea of relaxing after the main event and having a hash run.

The group decided that this should become a dedicated hash kennel and the name Sad Cow, a corruption of Sai Kaew, be adopted.  It was also decided that the Sad Cow H3 attempt to host runs pre or post further InterHash events from an island.  As Bali is an island the run remained on the island.

As the event was held late evening there are few photos of the actual 'run' along the beach from the Agung Hotel to the Casablanca Pub in Sanur Beach.

Click on the slide show to view the photos.

Almost every hash group has a red dress run (RDR) and the InterHash RDR's are a very special event drawing thousands of participants.  This year's event set a record of 2,347 paid participants.

All red dress runs are always a charity event and the money given to one or more local charities.

Click on the slide show to view the photos.
​
Origin of the Red Dress Run 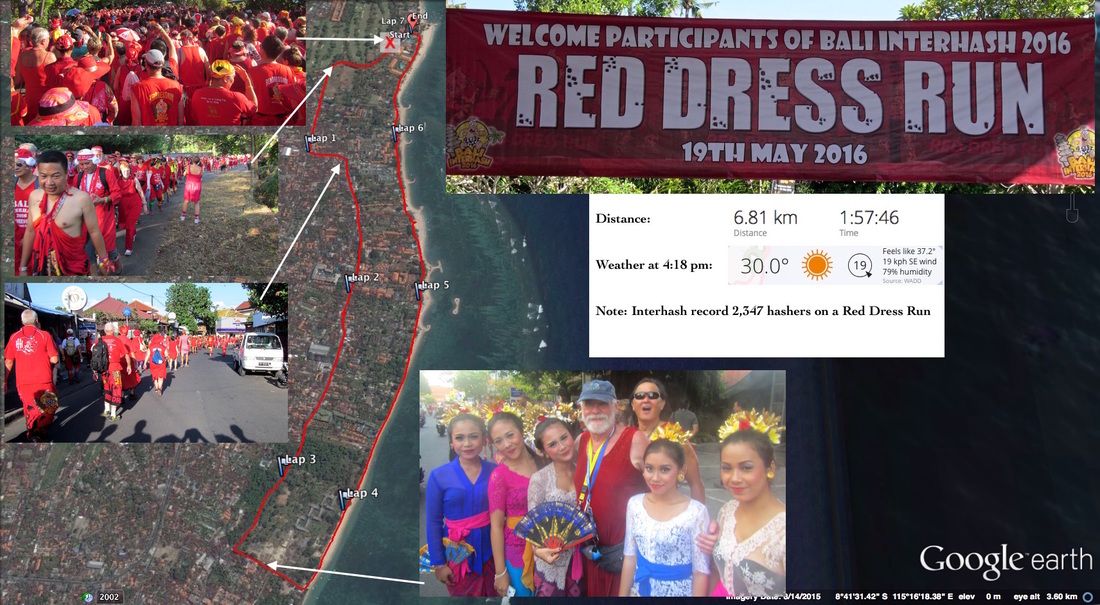 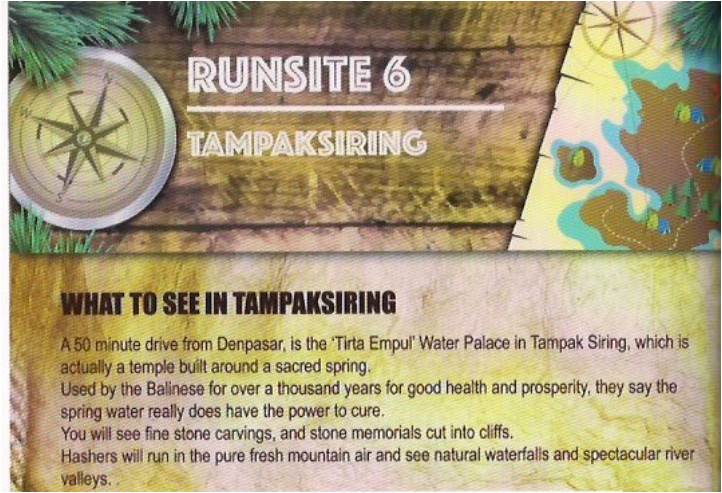 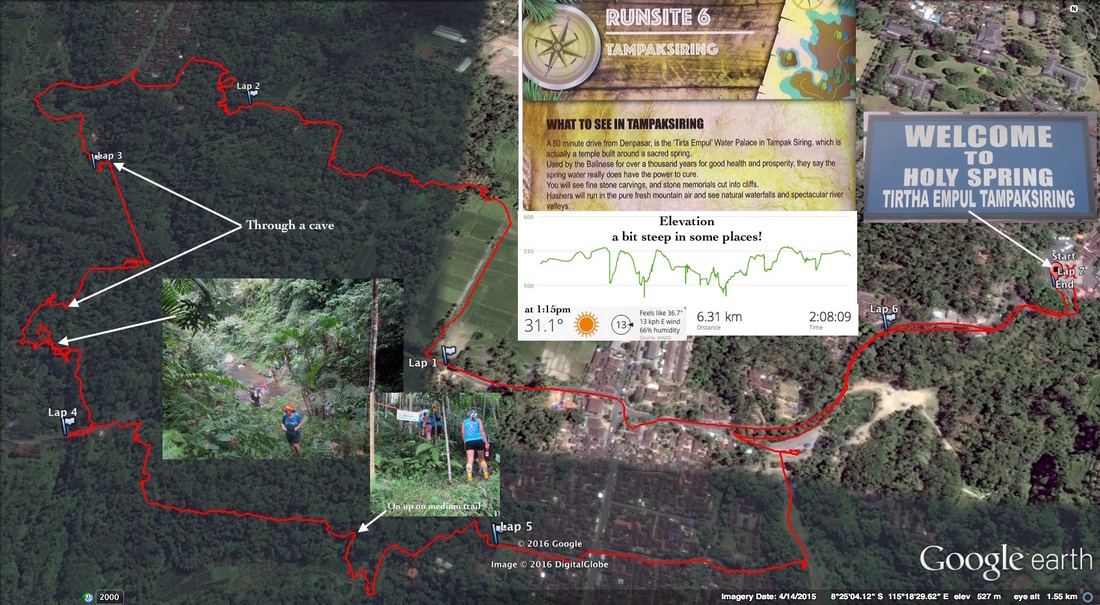 I managed to complete the medium portion of this trail.  But I did not notice and stone memorials cut into cliffs, but did do two water crossings and a trek through a cave/tunnel.  We did not get a chance to enter the temple or partake of the healing waters.  Maybe when we crossed one of the rivers or at the end when we got to wash some of the mud off in the canal we did get to enjoy the healing waters.

​What they failed to mention in the run description is the number and steepness of the hills that we would be both climbing and descending, nor the narrow jungle trails.  The heat and humidity did not help plus when you were in one of the valleys there was no breeze at all. Check out the elevation chart on the attached map of the run.  I think this was the hardest InterHash trail that I have ever done.  However, I did get an ego boost at the end from the comments of one young hasher who could not catch me on trail.  Plus, I was in line for my second beer when he arrived.

Hopefully the photos will show the thickness of the jungle and give some idea of the steepness of the terrain. 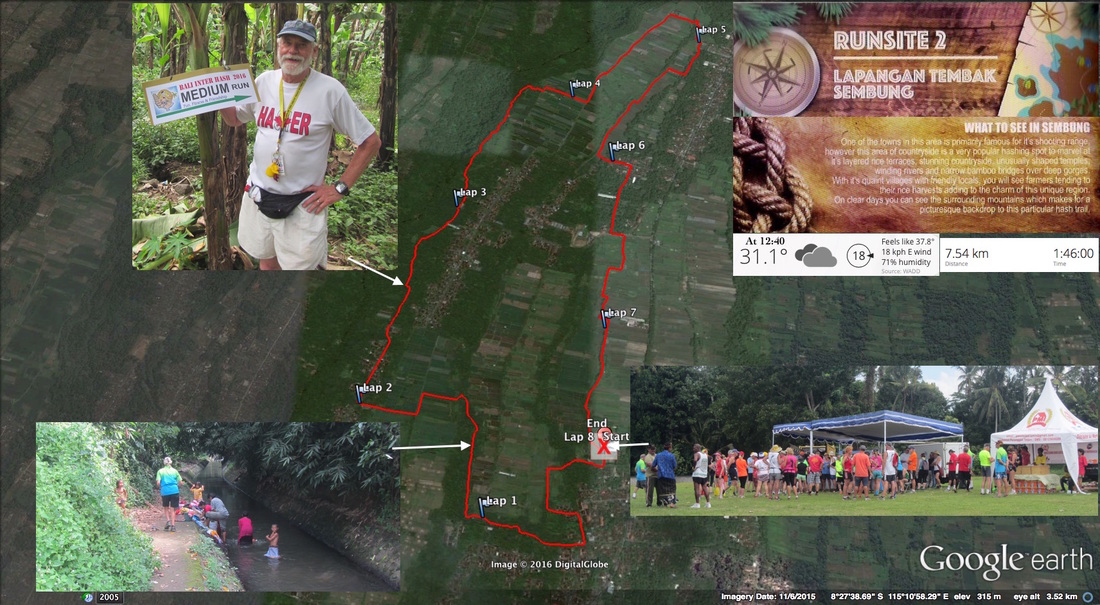 Thankfully trail number 2 was a much 'calmer' run being about 90% flat through farmers fields and along irrigation canals.  After yesterdays trail #6 which was just the opposite 90% up and down steep hills through some very thick jungle.

My bruised and blistered feet certainly appreciated the change of pace.  If I had been hobbling around on my painful feet I would have completed the trail in a much faster time with more running.  That being said I did enjoy the trail and the company along the way.

The Brussels Beer Odyssey event had a little cash left over because the breweries only charged them for half the amount of beer supplied the committee decided to host a get together at IH3 Bali for those who attended the Brussels 2014 hash.  Just a few photos. 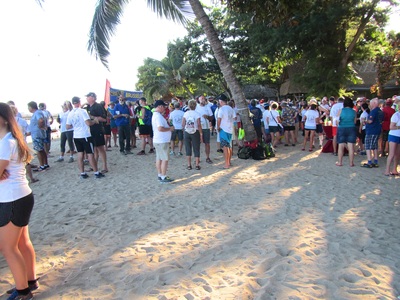 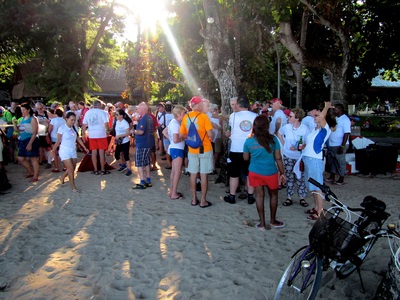 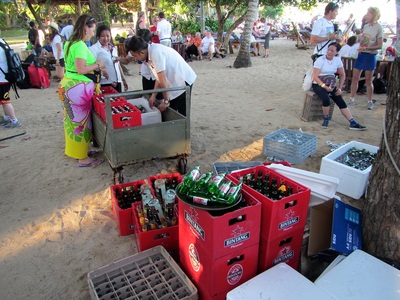 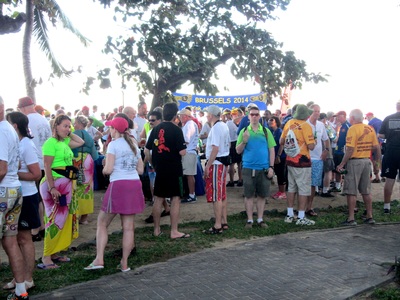 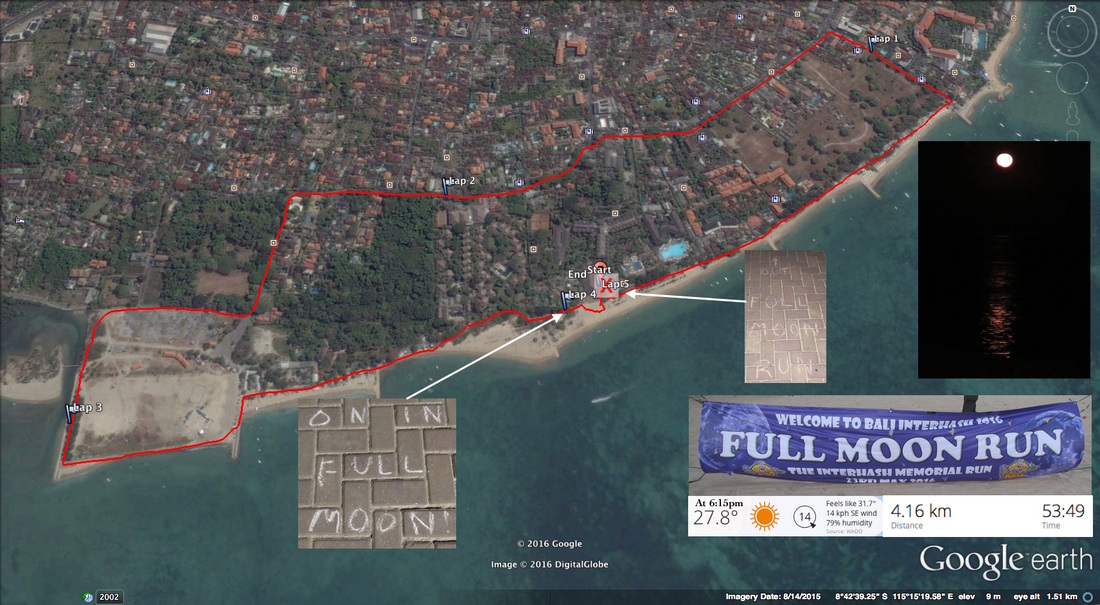 After the Brussels get together there was a Full Moon Run.  Because it was done at night in the dark there was no chance to get any good photos.

One of the highlights was being blindfolded and trying to find your way to the finish line.  A good time was had by all. 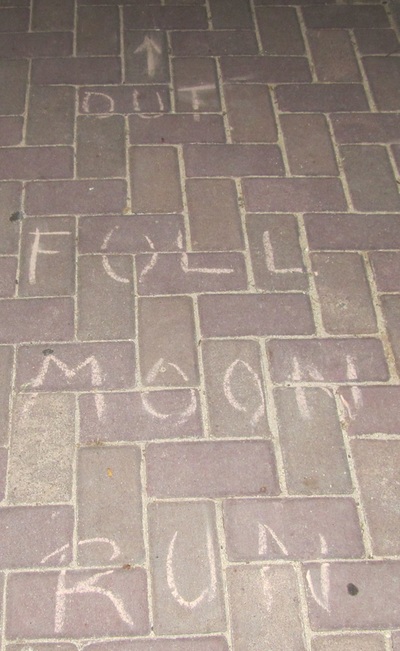 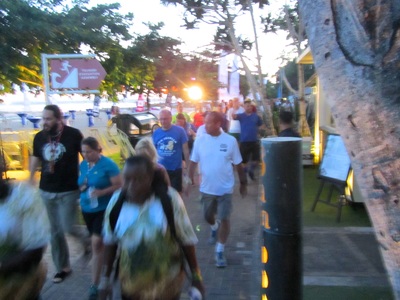 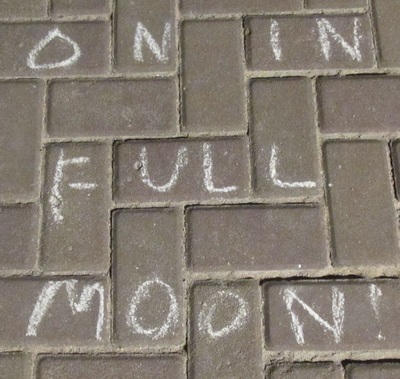 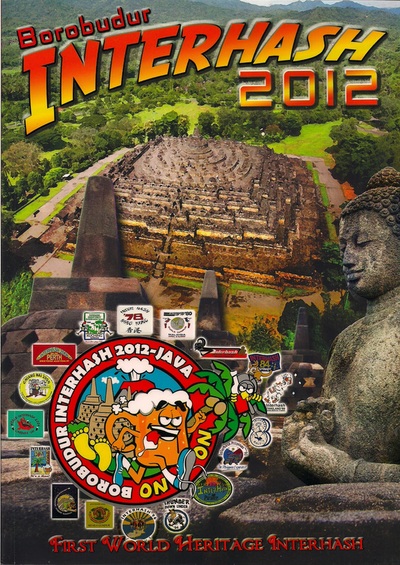 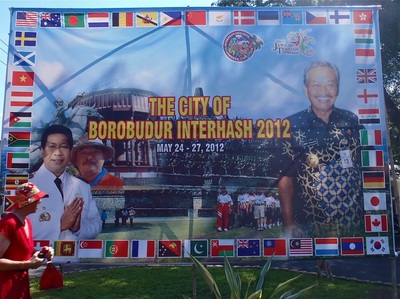 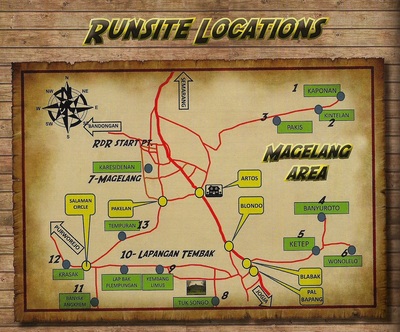 At all of the world-wide InterHash events there are several pre-lube (runs before the main event) and post-lube (runs after the event) to ensure that the hashers are sufficently 'lubricated'.  The Ottawa Hash House Harriers have started a tradition where they would host a run on an exotic island as part of the pre-lube festivities called "Sad Cow".  Also at this event there was a pre-lube in Jakarta as well as one in Bandung for those brave souls who did the "Son of the Great Train Rumble" from Jakarta to Jogjakarta.  The Red Dress Run was held in Magelang and the Hammersley H3 had a pre-lube preceeding the opening ceremonies.  A Full Moon post-lube followed the main event.

Borobudur, or Barabudur, is a 9th-century Mahayana Buddhist Temple in Magelang, Central Java, Indonesia. The monument consists of six square platforms topped by three circular platforms and is decorated with 2,672 relief panels and 504 Buddha statues.  Borobudur has been preserved through several restorations. The largest restoration project was undertaken between 1975 and 1982 by the Indonesian government and UNESCO, following which the monument was listed as a UNESCO World Heritage Site.

The runs in Kuching were mainly through rain forest and of course the weather co-operated and rained during the night before each of the runs.  That is except for the Red Dress Run where just after the opening ceremonies the skies opened up and drenched the hashers.  Luckily it was a nice warm rain but it created a definate lack of photos.


Kuching (Malaysian pronunciation: [ˈku ching], Jawi: کوچيڠ‎, Chinese: 古晉; pinyin: Gǔ jìn), officially the City of Kuching, is the capital and the most populous city in the state of Sarawak in Malaysia.  It is also the capital of Kuching Division.​
The Langkawi Beach Hash House Harriers hosted a special run for the Ottawa Hash House Harriers On the 24th of June as a prelube to InterHash 2010.  A special thanks to LBH3 for changing their normal run day to accommodate a few out of towners.
Apparently there were a few LBH3 who did not show up because they heard that OH3 sat on ice during the down downs.  No ice was on hand except what kept the rehydration fluid cold and in the jugs of water that was poured over the sinners.
Of course there had to be a Red Dress Run at the InterHash
01 July 2010
The day dawned bright and sunny and then the clouds began to move in.  As the hashers assembled at the stadium the dark meneacing clouds could be seen advancing towards the runners.  Just as the word was given to start the "run" the skies opened up and the rain seemed to come down by the bucket.  Undetered the hashers were off in the pouring rain and to much delight of the local population splashed their way through the main streets of Kuching.  Just before we entered the venue the rain stopped, the sun came out and the rehydration fluid was cold and welcoming.